Datapoint definition can be done in two ways. You can:

Different subsystems require their own method. 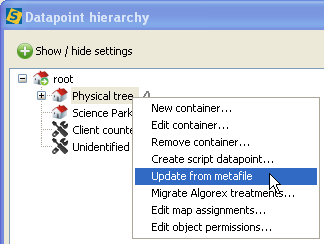 Algorex metafile can be generated via the CC11li32.EXE metafile generator, which is provided by SIEMENS in the Algorex editor package.

First you should create an Algorex container (see: Containers). For import, right-click on a physical container and select "update from metafile". Select the relevant metafile. After import the Algorex datapoint structure appears in the datapoint tree. During the next metafile import the datapoints, which were changed in the latest metafile, are overwritten. Deleted datapoints will also be deleted. The datapoint's name won't change if it was renamed at the management system level. Those datapoints can be highlighted by the corresponding icons in the tree.

Some parameters have to be set before importing:

SD3 use Jbus to communicate with the host system. JBUS has to be enabled at the SD3 panel. A Lantronix device server is used to convert RS422 line to ethernet, and convert JBUS data communication to TCP/IP. During commissioning the SD3 datapoints are downloaded from the control unit through JBUS. First, you have to configure properly both Lantronix and JBUS. Second, enable the communication in SIWENOID and the datapoints with their hierarchy are automatically uploaded from the SD3 panel and inserted into the tree view of the application. This is called initialization.